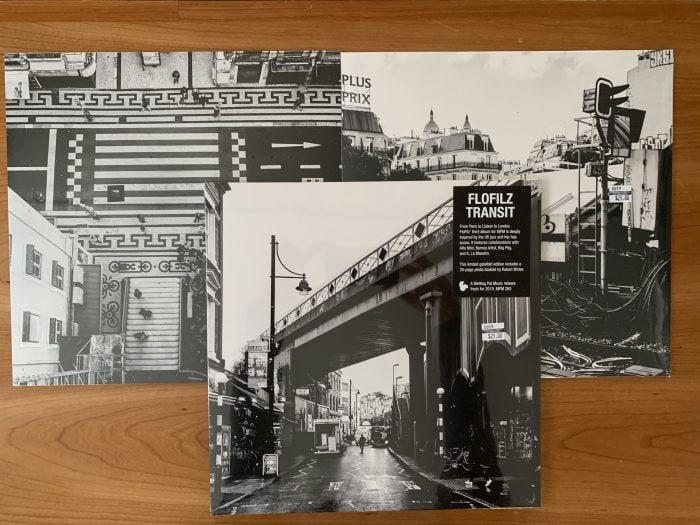 Belgian beatmaker FloFilz has been a shop favorite ever since Melting Pot Music put out his first solo project in 2014. 5 years and several releases later, the producer is still making some of the illest beats around. Lush, jazzy, late-night, golden era throw back stuff. For example, check out his remix of Afu-Ra’s Whirlwind Thru Cities. Blasphemous as it is to say, his might just be better than Primo’s.

The aesthetic of each of Flo’s releases on Melting Pot is enhanced by the cover photography of Robert Winter. Saturated black and whites of the European urban landscape – beautiful tile geometries, subway tracks, and overpasses. All first presses include a booklet with more of Winter’s photos. Unfortunately, the second issues of “Cenario” and “Metronome” don’t have the books but the beats hit just the same. Makes us want to watch Europe go by from a train window with Flo in our ears.

Mac Dre, along with Too Short and E-40, was one of the earliest to shape the Bay Area rap sound. His first album, Young Black Brotha, dropped in 1989; the same year as De La Soul’s 3 Feet High and Rising. His early albums have long been out-of-print in any format. The material released by the Strictly Business label never really left the region and rarely surfaces from the collections of rap nerds. In fact, we’ve only had the originals twice in 5 years.

City Hall Records has been been printing some of Mac Dre’s later catalogue – mostly material previously available on CD but never on vinyl. But now they are dipping into his early stuff, which has never got its just reprint on vinyl. This collection covers all the big hits and classic collaborations with other Bay greats like Mac Mall. Check Nuthin But Love on YouTube: https://www.youtube.com/watch?v=CkU93ZW2d-0 A must have for anyone getting into that Bay sound.

Our friends from HMV Tokyo were nice enough to bring us a handful of their recent re-issue LPs. These are only available in Japan – they do not ship these abroad. Limited edition, high quality pressings on 180 gram virgin vinyl with OBI strips, heavy cardboard covers, and inserts.

The T.Honda 45 at center offers heavy jazz funk covers of two classic tunes. Fans of Kudu and CTI should peep the slow grooves on Leeward by the Mabumi Yamaguchi. For those into Boogie and AOR with recommended the albums by Haruko Kuwana and Taeko Ohnuki (the latter an all-time best seller in Japan). The jazz traditionalists who dig Bill Evans and Gene Harris will enjoy Scenery, Ryo Fukui’s lovely piano trio recording. And finally, one copy of the now sold out Sounds of Sound; a hybrid of everything pysch.

When we were coming up, lo-fi hiphop meant DIY 4-track bedroom production with crunchy drums, skewed levels, and that prevailing background hiss. Or a 10th generation tape dub of some obscure underground group from Minnesota. Recently, the term “lo-fi” has come to describe something completely different: a specific sub-genre of instrumental hiphop. One that’s extremely well-produced but characterized by a mellow, introspective style. Pretty and subtle. As if Brian Eno made a hiphop record.

Flugehand’s latest release, entitled “Foremmi,” serves as the quintessential example of this new branch of hiphop. It’s the producers 4th release and demonstrates the high level of maturity of someone who’s been pushing the envelope of the artform. The sample choices are fantastic (jazzy), the sound is lush (of a hi-fi quality) but most impressive is the handling of his loops – the changes are so beautifully nuanced that it’s almost wrong to label them “loops.” Anyways, we highly recommend this one. Perfect listening with coffee first thing in the morning or the last record you put on before bed! Peep it here https://flughand.bandcamp.com/

Another batch of instrumental hiphop beat LPs just landed in the shop. This time they hail from Mr. Brown’s UK label WeStayTrue, which consistently drops the illness. Both titles were made using the classic SP1200 beat machine, giving them a fat, lush, warm sound. The artwork recalls the simplicity of old jazz covers. The Armed Dukes looks like it came straight from the first series of CTI’s catalogue. Read more and do some listening on their soundcloud https://westaytrue.bandcamp.com/

Fresh off the UPS truck all the way from Germany, we got the latest installment of PostPartum’s instrumental hiphop goodness: Jazzquarters “Wayz of Da Underground.” Limited to 250 on Marble wax and 150 of black worldwide. Quality pressing, Japanese OBI strip, and download codes for those on the go. Don’t sleep – these are almost gone off their site and we got limited quantities. Peep the sounds at https://postpartum.bandcamp.com/album/wayz-of-da-underground For the tape heads, we also copped a few of Hydrogenii buttery remixes of those rap classics: https://postpartum.bandcamp.com/album/the-remix-tape-instrumentals

Just in for the Soul lovers: LIT’s follow up to their release of Lee’s LP “Time and Place.” This comp features rare and unreleased cuts, like “Bad Girl,” which till now has only been available on 45. Check YouTube for the sound: https://www.youtube.com/watch?v=3lxp7WVXiXU